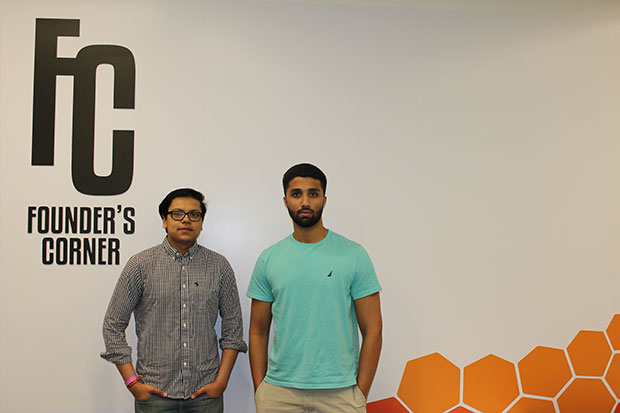 Srijan Karan, 19, and Rahul Sundararaman, 18, declared their computer science majors when they arrived at Virginia Commonwealth University, yet their passion for the field of computer science goes back all the way to middle school.

Since eighth and ninth grade respectively, Karan and Sundararaman have been refining their computer science skills on anything they could get their hands on, whether it be Android smartphones or TI-84 calculators. They describe coding and computing as something that simply “came naturally” to them.

The two students attended Thomas Jefferson High School for Science and Technology in Alexandria, Virginia, where they took advanced computer science courses for all four years. The courses at TJHS were highly competitive, but Sundararaman says that keeping up with the competition made [him] want to learn more about computer science.

Surprisingly, the two TJHS alumni were never formally introduced to each other until they came to VCU, where they met at a professional engineering club meeting.

Thus, the two came together. Initially, they teamed up for VCU’s RamHacks hackathon, a hectic event where coding and programming aficionados work and compete against each other for a straight 24 hours.

Now, the team is taking on a new project: starting a business. SigmaCV is a targeted advertising company Karan and Sundararaman have developed with the help of VCU’s pre-accelerator program that will help business owners predict the future.

Sundararaman describes SigmaCV as a data analytics platform that uses cameras to collect data. The product then uses existing facial recognition algorithms to analyze the frames of the video captured and see the age, race, and genders of the people walking by.

For Karan and Sundararaman, it’s about getting useful information for the business. Their product will analyze trends so that businesses can optimize their in-door advertising and window displays.

If business owners know who will be coming to their stores on certain days, then they can tailor their advertising and sales to those specific customers. Karan and Sundararaman are seeking both to maximize profits for the business and to improve the customer’s shopping experience. Karan says that SigmaCV would benefit both the customer and the store.

SigmaCV will examine footage not only for customers’ demographics, but also for their emotional and physical reactions to a business’s advertising. This will function as feedback and will let business owners know if their advertisements are working. Naturally, privacy concerns arose when the team initially pitched the idea of SigmaCV to both potential clients and potential investors. In response, Sundararaman says SigmaCV doesn’t store a picture of their face and that it only records data about a person’s race, gender, and age, which is not something you can attach to one specific person.

The duo explains that targeted marketing on the basis of demographics is already a standard practice within online shopping. Their goal is to bring this same model of advertising to the physical world.

Advertising right now is falling behind when it comes to technology, says Sundararaman. My uncle owns an advertising company where they print out advertisements. I started to pitch him ideas about technology and advertising and this idea came up.”

This is not the first time Karan and Sundararaman have taken on such an ambitious task. Sundararaman has previously taught himself how to make iPhone apps, and Karan has developed software for the Google Glass.

Karan and Sundararaman knew they had the tools and the experience they needed to fix the deficiencies they saw in the world of targeted advertising. They only needed some encouragement to turn their idea into a reality.

Karan says that both the talk with Rahul’s uncle and the pre-accelerator program pushed us to make something more out of this rather than just another project.

He saw VCU’s pre-accelerator program as the perfect opportunity to take an idea and turn it into a business. Sundararaman says the program has given the two students the tools and resources they need to keep SigmaCV running and to really grow and expand and take it to the next level.

The two young entrepreneurs are getting ready to give local businesses a demonstration of their product in May of this year. The demo period, which they estimate will last anywhere from two to six months, will let Karan and Sundararaman know whether the product works well for [business owners] and actually provides a good business benefit. Upon hearing back, SigmaCV will add some finishing touches to their product and tie it up together into a bundle before releasing the finalized model to the market in the fall of 2017.